Between completing a Ph. D. in education, training as a full-time athlete, advocating for victims’ rights, enduring legal battles, and juggling a part-time job, Anastasia Boldireff has a lot on the go.

If it weren’t for the support from the South Georgian Bay community, she said some days, it would be hard to keep it together.

“Collingwood is such a good place for athletes. I’ve had so much support,” said Anastasia.

Over the course of her life, her love of swimming and passion for language and education have always been her guide. Growing up, Anastasia’s family moved around a lot, but they’ve had a cottage in Wasaga Beach since the 60s.

“It’s always been home for me,” said Anastasia, who fondly remembers growing up on Georgian Bay, learning how to swim by racing her brother and father to the buoys and back. When she was just six years old, she started competing with the Burlington Aquatic Devilrays, later going on to swim varsity with the York Lions Swim Team during her undergrad at York University.

After graduation, she felt her career in swimming was over and shifted gears to pursue education. She got certified to teach English as a second language and on a whim, took a position in Bogota, Colombia. She loved it, so she stayed.

What was supposed to be a one-year stint turned into a job as an adjunct professor for almost four years. She moved to Colombia full time, and not surprisingly, it didn’t take long for her to start swimming again. “I remember being surprised there were pools in Columbia,” Anastasia laughed. “I started swimming again, and it was fantastic.”

It was also her refuge, and even though she wasn’t competing anymore, she was in the pool almost every day.

Then, in 2017, she qualified for the FINA Masters World Championships in Budapest, Hungary, where she placed 20th in the 50M breaststroke event. Realizing that her career may not be over after all, she went on sabbatical, and started swimming full-time.

“There was this impression I had that I had peaked. Since I was older than 20, I thought that was it for my swimming career,” she said. “Some athletes train for a career in longevity, rather than peak in their 20s. I’d like to have a longer career in swimming.”

However, her family missed her, and in a “sobering moment” she realized she wouldn’t be able to support herself solely through swimming forever, so she decided to do her Ph. D. She chose Concordia, and she spent the first year bouncing back and forth between Colombia and Montreal. Eventually she knew she had to dive in with both feet if she really wanted to fit in, so she gave up her apartment in Colombia and threw herself into her new life in Montreal.

Little did she know, her athletic and academic aspirations were about to face a much greater challenge than she could have ever anticipated — and to say the last three years have been tumultuous would be an understatement.

In the fall of 2019, having just started her second year of university, Anastasia was harassed by a man who she later found out had a history of similar behaviour.

After being found “not criminally responsible” to his previous acts due to mental illness, her aggressor was released earlier that spring — free to find his next victim. Unfortunately, he found her.

The situation escalated, and despite several attempts to get police intervention, Anastasia became increasingly concerned for her safety. Eventually, she was asked to leave Montreal to protect herself, so she returned to Wasaga Beach. But even moving provinces didn’t provide her the refuge she had hoped, and after receiving a number of harassing phone calls, she decided to leave the country altogether. Columbia was calling.

“I spent the better part of my twenties there,” she said. “It was the only place that really felt like home.”

While she was there, she contacted the press to raise awareness about the issue at hand, which started a campaign raising awareness about the traumatic experience of being a victim of crime pending trial. Constantly on edge, she continued to complete her Ph. D. from afar all the while, and then Covid hit.

“When all of the closures came, I was relieved to an extent,” said Anastasia. “After months of running I could actually stop, and the whole world stopped with me.”

However, the closures also prohibited her from swimming indoors, so she began to swim outside. Eager to compete again after being isolated, she signed up for an international open water swimming event in Cartagena on Feb. 6 2022. Anastasia placed eighth in her category, qualifying her to compete at the Oceanman World Championships in Greece on Oct. 29.

In March 2022, she was subpoenaed to Montreal and spent a month in legal meetings and court proceedings. She became an advocate, speaking to the press to educate the public about the toll it takes on victims who report a crime of sexual violence. She also wants to raise awareness about the financial costs of victimization and the immense impact it has on a victim's personal and professional life.

In April 2022, her aggressor pled guilty to criminal harassment, and he is currently serving a two-year probation at a mental health facility.

Throughout the entire legal process, Anastasia swam. It has and always will be her safe haven keeping her grounded and her head clear. And because of it, she is able to look forward.

“I will not let being a victim of crime define me,” said Anastasia.

She is now able to focus all of her attention on her training for Oceanman, and is turning to her community — who has given her solace over the past few months — for help.

“My return to Canada at the Georgian Bay community, at first, was a little bit difficult,” she said. It continued that way until one day, she happened to pop her head into the Collingwood Foundry while walking downtown. She joined almost immediately, and she said ever since, she’s felt a sense of stability that she hasn’t felt in a very long time.

“Coming home and feeling this sense of community in Collingwood and talking to people who really seem to care… I have an extreme sense of gratitude,” she said.

On Sept. 28, Anastasia will be speaking about her experience as a victim of crime and how important swimming has been to her for healing as part of a talk sponsored by The Collingwood Foundry and Rally Beer.

She is looking to raise $10,000 for her trip to help cover the costs of the flights, hotel, food, training, and racing suit. Any excess of funds she receives she will be donating to help survivors of sexual violence.

For more information about her story or to donate, visit her fundraising page. 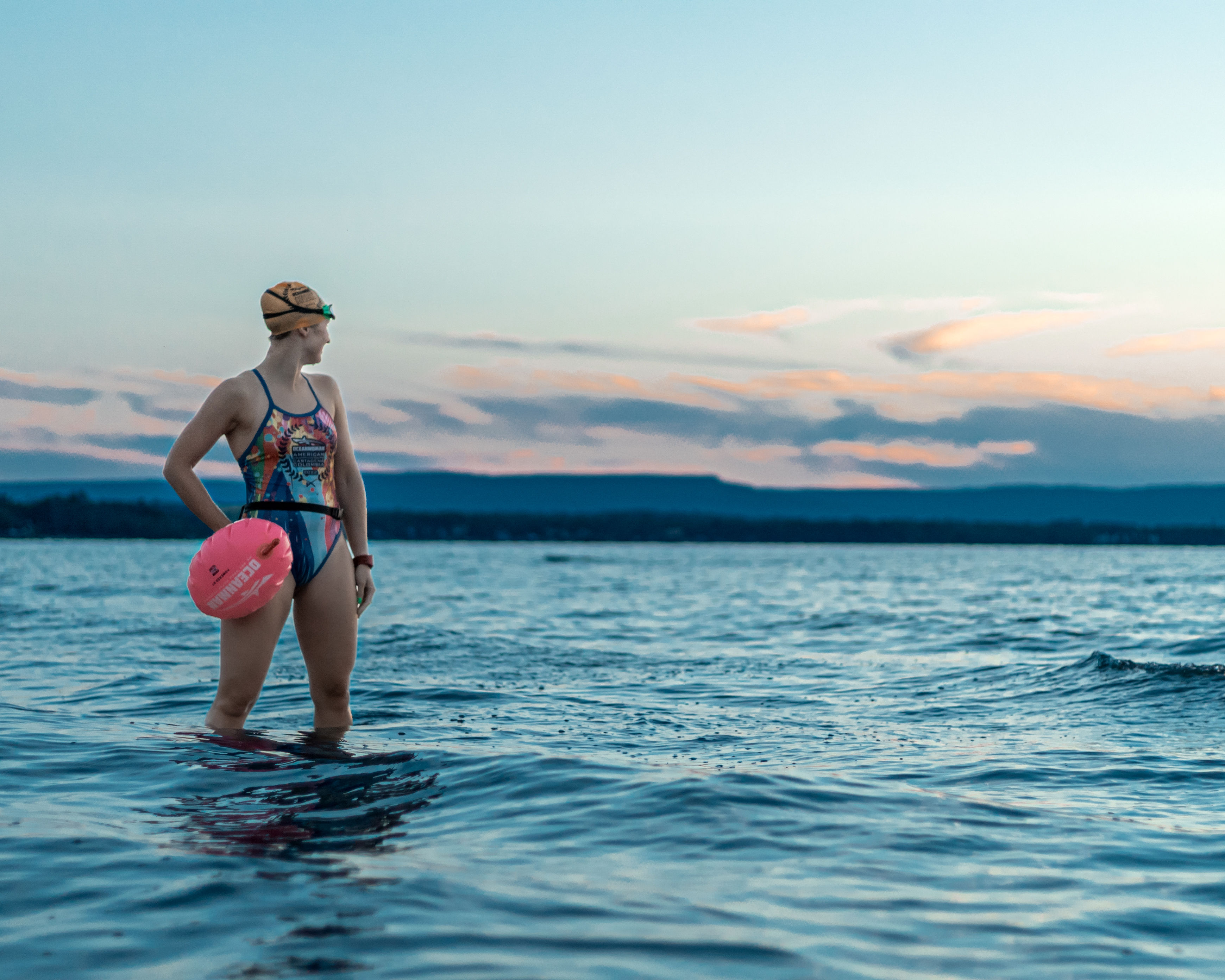