In the Business of Feeling Beautiful

They also describe its founder and CEO, Julie McClure, one of the newer members of the Collingwood Foundry. Julie, along with old-friend-turned-business-partner, Elizabeth Goldspink, co-founded Hello.Me in 2018 with a vision of redefining what it means to be hormonal.

“When did being ‘hormonal’ become a bad thing?” said Julie.

Julie and Elizabeth met on the first day of naturopathic school several years prior and always knew they would work together. They both had experienced hormonal imbalance in the past, and understood firsthand the struggle of living in constant pain.

“We wanted to remove the stigma and create a bold and beautiful lifestyle brand that empowers women and allows them to take back control of their hormones, so they can get back to the real and best versions of themselves,” Julie said.

“In this fast-paced world — with really smart people — I was learning so much. But from a lifestyle perspective, it was difficult because something just didn’t fit,” said Julie. “I was craving something from more of a soul-fulfilling purpose.”

The duo decided to start with one of the biggest sources of frustration for women: birth control. They began brainstorming ways to solve the imbalance that stems from nutrient depletions as a result of taking birth control for an extended period of time, so all women can live in a state of “thriving versus surviving.”

Because Julie herself felt like she was simply “surviving” for so many years.

Originally from Fredericton, New Brunswick, Julie has always been passionate about health and the human body. Her family moved to the GTA when she was 14-years-old, but her maritime heart brought her back east to study science at Mount Allison University. She finished her degree in Ottawa, and in the process, became interested in business. So, she shifted gears and went off to business school, spending her last semester studying International Business Exchange in Barcelona before landing a full-time job on Wall Street.

Thus began almost a decade of corporate finance, working for world-class wealth management firms, including Morgan Stanley and Citigroup, in consumer retail and investment banking. She moved back to Toronto in the wake of 9/11 and started working for a private equity firm before going back to Morgan Stanely to cover its Canadian operations.

“I loved New York City. It was a fun place to be even though I worked a ton,” said Julie.

But along with it came a decade of chronic migraines.

“In this fast-paced world — with really smart people — I was learning so much. But from a lifestyle perspective, it was difficult because something just didn’t fit,” said Julie. “I was craving something from more of a soul-fulfilling purpose.”

So, in the spring of 2008 Julie decided to take a year off to reconnect with her passions, figure out her health and spend more time with family. Three weeks after leaving Morgan Stanley, she arrived in Hawaii for an intensive yoga teacher training course — having not done more than six consistent months of yoga prior.“It was kind of like a Seinfeld episode,” Julie laughed. “After the first class I thought, what have I done?”

But determined, she continued on her health journey. One of the biggest catalysts was that she had been on birth control and a naturopathic doctor said it was causing several of her symptoms, so she eventually went off it. Julie slowed right down, changed her environment, studied raw food and juicing as well as a lot of self-study, and finally had a breakthrough.

Moreover, she went from having five or six migraines a week to only two a month.

“Once I had healed my own health, it was a complete change in the quality of my life. I became passionate about health and wanted to continue on this journey and help others do the same.”

Julie applied to Naturopathic School, but after about a year into her studies she started getting the bug to create. She combined her newfound love of health and wellness with her background in business and science and founded Be Nourished Inc. (benourished), the first Canadian company to distribute raw, vegan, cold-pressed juices through grocery stores in Canada. Julie had never raised funds or run a business of this nature, but she figured it out as she went, and even appeared on an episode of Dragon’s Den in 2012.

The process was four years in total, from concept to creation, and she had tremendous success. However, it was challenging to get the funding to take the business to the next level, so eventually, Julie walked away.

“I think oftentimes people think every dollar has the same value, and it doesn’t. Some dollars are worth way more in terms of their strategic value, but they change the journey for the entrepreneur.”

“The process was exhausting. I basically ran a marathon for four years,” she said.

In hindsight, Julie added that if she had given herself time to pause or a partner to lean on, she probably could have pivoted and found the funding. But regardless, she learned a lot.

“I learned about where my strengths are, where I like to spend my time and what gives me energy,” said Julie. “I also learned about the types of investors and types of people I wanted to bring around the table.”

“I think that is critical,” she added. “I think oftentimes people think every dollar has the same value, and it doesn’t. Some dollars are worth way more in terms of their strategic value, but they change the journey for the entrepreneur.”

After leaving benourished behind, Julie dipped her toes back into corporate finance, but quickly realized she was back on the wrong track, and it wasn’t long before she got the itch to create again.

“I love creating solutions, I’m a big-vision person. I think for me, it’s big vision, strategy, and figuring out how to get from A to B. Taking nothing and making it come to life,” Julie said.

This time, before diving any deeper, Julie reconnected with Elizabeth and started planting the seeds for Hello.Me.

“I think having a partner in business can be tricky, but you need that help,” she said. “Having a partner or advisors early on that you can pull from, and a team around you that are supporting you… it’s important.”

And it helped that their ethos aligned.

“We both had a passion for helping people really transform from the inside out. Radiate and shine their own authentic beauty and personality,” said Julie.

Currently, 99.5 percent of their business is in the United States, in urban-centric and key markets like Los Angeles, New York and Chicago. But the big vision is to create a household name for hormonal selfcare, wellness and beauty products across North America and beyond.

“We are not here to judge whether or not you should be on birth control, we want women to feel empowered, but if you choose to be on it, we want you to still be able to be at your best,” said Julie. “It’s like sunscreen to being in the sun.”

The bottom line is empowering women to believe they are allowed to feel their best every day, and that they don’t have to sacrifice anything to do so.

Prior to the pandemic, Julie spent the majority of her time travelling between Toronto, Vancouver and Los Angeles. But, she was becoming more empowered to feel her best every day as well, and for her, that meant moving closer to nature.

She discovered Collingwood when, by chance, she sat next to someone from the area on a plane to Costa Rica last winter. After a few trips to visit, she was hooked.

“Something I had been gravitating towards was a nice community. That became incredibly apparent for everyone during Covid... the importance of community,” said Julie. “And I just love the community here, even though it has really been closed the entire time. But everybody has been phenomenal.”

Julie arrived with her 11-month-old pup late winter and has committed to Collingwood until at least October. Fortunately, within her first week of arriving she was introduced to the Foundry, and “it has made all the difference.”

“This space is just… I love it,” said Julie. “I love the people and the focus on the local support. Being at the Foundry is one of the reasons why I wouldn’t want to leave Collingwood.”

As for the future of Hello.Me, there are several products in the works, all of which hope to empower women to take control of their hormonal health — no matter what stage of life they’re in.

“We want to embody the confidence and authenticity of looking in the mirror and being proud of who you are,” said Julie. “And owning it.” 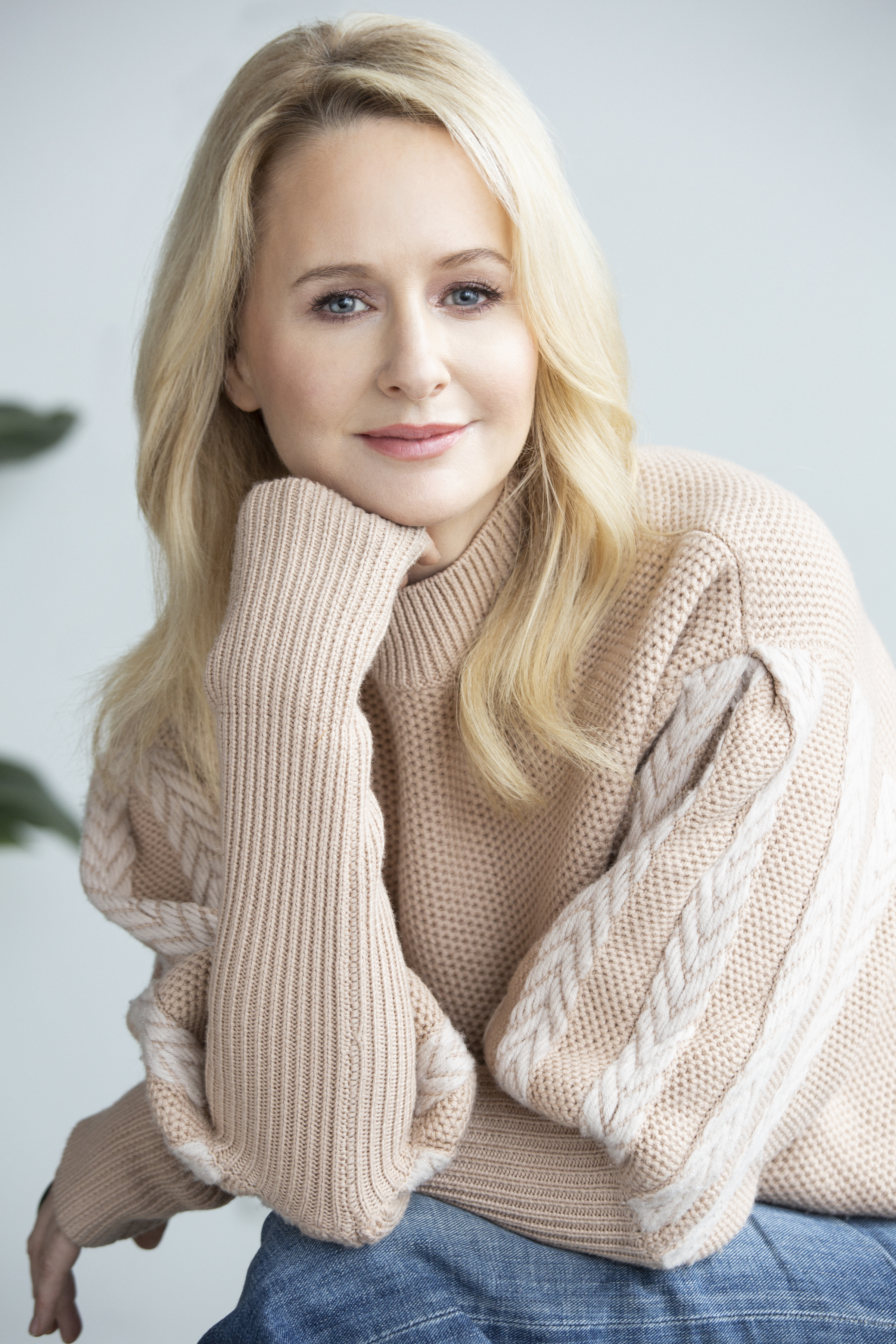